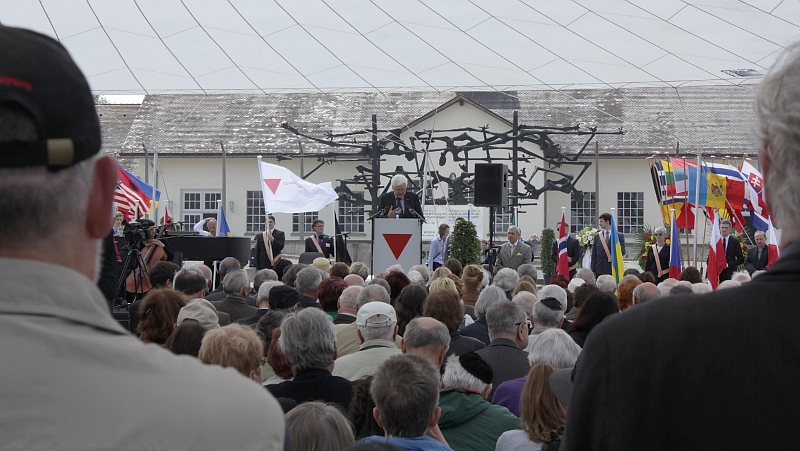 It is my immense pleasure to welcome you on this 68th anniversary of the liberation of this camp.

It is also an honour for me to welcome the representatives of the cities paired with Dachau and the musicians from the township of Oradour-sur-Glane, who have graced us with their presence and are the guests of the city of Dachau and the CID, at the invitation of the mayor of this martyred city.

We are gathered here, 80 years after the inauguration of that concentration camp, a place where the resistance movement to Nazism was snuffed out and crushed, and that served as the school for human rights abuse, where people studied methods for the annihilation of human beings, the "spawning ground" for a prison system of more than 2,000 camps and commands, including the extermination camps of Auschwitz-Birkenau, Majdanek, Sobibor, and so on, where 6 million Jews, Roms and Sintis were killed by shooting, asphyxiation, gassing, pseudo-medical experimentation, and torture.

We are gathered here to commemorate the massacre of Oradour-sur-Glane, on 10 June 1944, which resulted in total destruction of this village in the Haute-Vienne region, located some twenty kilometres northwest of Limoges, and the systematic massacre of its people (642 dead), perpetrated by a detachment of the 2nd Armoured Division of the Waffen SS.
It was the largest massacre of civilians in France by the German armed forces, not unlike those in Marzabotto, Italy or Distomo, Greece, which also took place on 10 June 1944, enacting on the Western Front practices commonly used on the Eastern Front, where the massacre in Lidice, Czechoslovakia, took place on 10 June 1942, two years to the day before the one in Oradour. 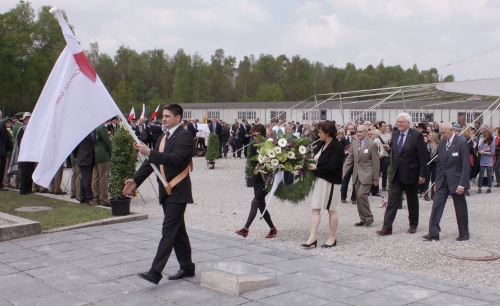 We are also here to commemorate the earliest resistance fighters, which makes this place in Dachau the symbol of their struggle: the first resistance members imprisoned there were Germans, political arrestees, people protesting Hitler's regime. And we should never forget the fact that: Between 30 January 1933 and 8 May 1945, 316 members of the Bavarian parliament were victims of Nazi persecution. 67 of them were imprisoned at Dachau, 45 starting in 1933. Some did several "tours" in Dachau. Those 67 members of parliament included 42 members of the SPD, 11 from the KPD, 6 from the BVD, 1 from the SAPD, 2 lawyers (including Joseph Panholzer), a journalist, a union representative, a priest, an inn-keeper and a shop foreman. There were also members of the Weimar Republic Reichstag who died at Dachau, or as a consequence of their imprisonment here: Anton Bias(SPD), Conrad Brosswitz (SPD), Eugen Kaiser (SPD), Franz Metz (SPD), Friedrich Puchta (SPD). In the case of Franz Stenzer and Eugen Herbst (both members of the KPD), they died here in 1933 and 1934. Out of 12 Austrian members of parliament who were victims of Nazism, 6 were prisoners at Dachau and 5 died here: Hans Prodinger in 1938, Hans Sylwester in 1939, Karl Knapp in 1944, and Anton Falle and Oskar Janicky in 1945. The sixth, Robert Dannenberg, who was transferred to Buchenwald, disappeared at Auschwitz in 1944. The first members of the resistance imprisoned at Dachau were Germans, members of parliament, Communist party members, lawyers, homosexuals or "associates".Later, members of political resistance groups from 38 countries, stateless persons, Jews, Roms and Sintis, and members of religious orders passed through the gates above which was written "Work makes you free". These deportees from every country, opponents of Nazism but of varying origins and beliefs, made this place an international site. The act of depositing the ashes of the Unknown Prisoner during the inauguration of the Dachau Memorial made this site not only a German cemetery, but also an international one.

And it is to those who passed through the gates of this site and its external camps and commands that we pay homage today, by repeating their oath: "Never again!" What does "Never again" mean? Let us look at what the world has become since this camp was liberated on 29 April 1945! Never again? Don't make me laugh.

We have witnessed, and continue to witness today, massacres all round the world: in Africa, Southeast Asia and, closer to home, in the former Yugoslavia and in Syria. But the entire world remains silent. We have witnessed, and are witnessing, persecution on political, ethnic or religious grounds, or because someone is part of a particular group or of a population considered to be pariahs. We see the Roms and the Sinti, minority groups, deprived of their human rights in Europe and elsewhere, the victims of endless discrimination, even today.

Indeed, in 2012, the government of Germany finally dedicated, in Berlin, a monument to the memory of all those who disappeared during World War II, but the members of this group continue to be systematically shunned in Europe. This is simply unacceptable. We are once again seeing a resurgence of anti-Semitic actions, for example in Hungary where, at the Loránd-Eötvös University in Budapest, professors' nameplates had the following inscription affixed to them: "Jews, the university belongs to us, not you!" We are once again seeing more and more people looking for work, and we are experiencing a major economic crisis, one of the factors that enabled Hitler to take power. Are Germany and the world about to undergo a third world war due to ethnic, religious or political causes?

Do we want to live in a world where there is no recognition for human rights, or the freedom of religion, or equality for everyone, regardless of their ethnic origin or gender? Admittedly, we have made some progress: There was the Eichmann trial in Israel, which revealed the destruction and systematically planned and calculated extermination by the Nazis of the Jews, and the Roms and the Sintis. There were the Nuremberg trials, which gave rise to laws and treaties to prosecute human rights abuses, along with the creation of international courts. There was Jean Monnet in France, the father of modern Europe, who understood the need to consolidate German and French resources in terms of coal and steel, and to form an economic alliance and thus prevent any further wars. We now have the European Union, an economic group that attempts to provide security for its peoples. Mankind has made progress in many areas, but still falls short in others and occasionally proves to be inferior in moral stature to other animal species. Animals kill to eat and thus survive. Mankind is capable of killings, massacre and torture for the mere pleasure... Through intolerance. Through intolerance of religious beliefs, intolerance of the colour of one's skin, and intolerance in political terms. Every year, we speak of the people of many nationalities who passed through here. And what about Germany? We still have no real notion of the effect of two vast world wars on the German people. How do the Germans view this part of their history? What awareness arises in a people that has been through the initial euphoria of Hitler and then Nazi barbarism? Especially after their country's defeat in 1945, seeing their country devastated and the millions of deaths caused by Nazism? And what of the citizens of the city of Dachau... a city of writers and painters before the war, who said after the liberation of Europe on 29 April 1945 that they had seen nothing and known about nothing, and that orders were orders? Wasn't there a movement after the war ended to demolish the site in order to erase its history? Mustn't one wonder how such a thing could ever happen? How can one carry on after having massacred so many millions of people? How, as a German, can one relate to the past? To history? To the feeling of fear, of shame, of guilt, of grief? To the silence? To the family conflicts lasting for generations? To the anger of having lost the war by having followed a murderous minority faction? Take the case of those former SS officers who still claim today that the Fuhrer should have won the war, or those neo-Nazis who proclaim the ideas in "Mein Kampf", a sinister work that everyone should have read closely enough to reject the notions of this painter figure called Hitler... How can one find his identity when confronted with current affairs, with Dutch citizens who demand that a German return their bicycle that was requisitioned during the war? How can one find a path through life when he asks for directions and is told in reply: "Keep going straight ahead"? Or when people from Dachau go abroad and find that their car, bearing plates from their home city, has been covered with scratches? ...
How were the people of Germany able to find their way again?

We are gathered here, before the Nandor Glid monument, which commemorates those who disappeared at Dachau and in the camps and commands beyond it during the Nazi era, and we do so united with the German people. We are also commemorating the German resistance movement, largely underestimated and forgotten, or even denied as part of the story of millions of deaths. Some wonder about reconciliation and internationalism. In relation to reconciliation, Simon Wiesenthal's message is clear: only the victims, those who are gone, those who suffered, are entitled to grant forgiveness to those who wronged them. The right of pardon is thus not ours, but we are called to achieve reconciliation with the German people. And internationalism is what we are experiencing at this very moment, embodied in this entire assembly and these flags representing the 38 countries from which the Dachau deportees hailed. This is an international cemetery and memorial, with all the wealth endowed on us by our differences, be they ethnic, religious, ideological, political or sexual. We rejoice at the memory of the liberation of the Dachau concentration camp and its satellite camps and commands. We rejoice in knowing that Germany, too, was liberated from Nazism and that it is ardently opposed to any resurgence of neo-Nazism, as well as to any form of human rights abuse. 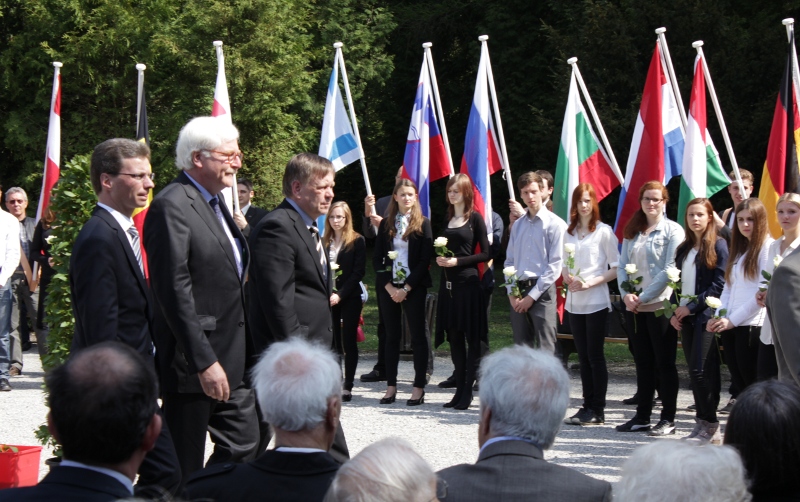 We honour the earliest members of the political resistance movement, the members of parliament, the Communist party members, the Germans such as Pastor Niemoller, who stood up to the Nazi barbarism, long before members of the resistance from other countries were incarcerated. We honour and show our respect for Germany and its people who, since its liberation, have sought forgiveness, continue to do so today, and seek to make amends with the victims, their descendants and organisations such as the CID, along with those wronged by the Nazis. We salute the German system of justice that continues striving to prosecute former death camp guards and former participants in the massacre at Oradour-sur-Glane. We honour all those who escaped from Dachau and its satellite camps and commands, regardless of their place of origin, their religious beliefs, or their political persuasion, for they are all survivors of Dachau. We do not fear a resurgence of Nazism in Germany and we must remain vigilant, but its people are stalwart and prepared to immediately declaim: "Never again!" in the face of trends that may emerge due to ignorant individuals and organisations who have learned nothing from history.

We celebrate the diversity of mankind.
Let us celebrate it with dignity, with the hope that this initiative will serve as an example, that it may be embraced and emulated by other peoples round the world, by human kind.

Thank you for your attention.